ASKING FOR A FRIEND 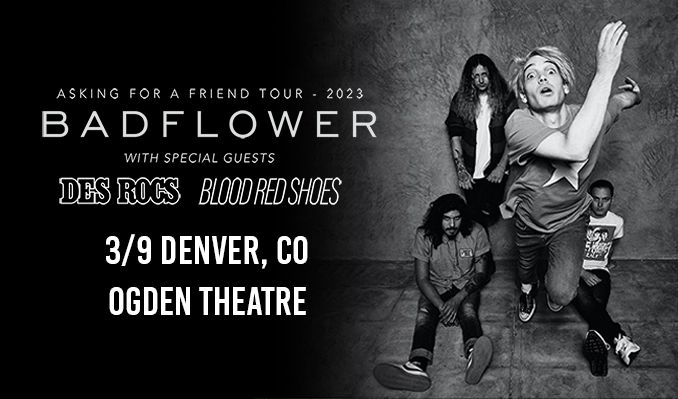 Beauty blooms from discomfort. The second we squirm at the utterance of a lyric or the echo of a guitar chord is the moment we learn about our limits and, perhaps, make a change in our lives. Badflower aren’t afraid of making anybody uncomfortable. The GOLD-certified Los Angeles-bred and Nashville-based quartet—Josh Katz [lead singer, guitarist], Joey Morrow [lead guitar, backing vocals], Alex Espiritu [bass], and Anthony Sonetti [drums]—siphon stress, sleeplessness, sex, sadness, mania, pain, and truth into revelatory alternative anthems. Katz’s quivering confessions seep into climactic distortion and, like any good rush, you need more. They deliver this rush on their 2021 second full-length offering, This Is How The World Ends (Big Machine/John Varvatos Records). “It’s hopefully more than just brutal honesty,” muses Katz. “To me, it’s sassy, uncomfortable, funny, clever, and sad. It wasn’t a casual process. It’s all in, so I’m all in. I don’t stop. I don’t quit. I cry a lot. I neglect everything else. There was no reason to set an alarm and wake up in the morning. There was no reason to do anything but make the best album possible. That’s what we did.” Badflower continue to commit body, blood, mind, and soul to their art. They’ve certainly grinded to get to this point. After forming in Los Angeles during 2014, they dropped two EPs before sending shockwaves throughout rock with their 2019 full-length debut, OK, I’M SICK. LoudWire hailed it among the “50 Best Rock Albums of 2019,” while the singles “The Jester,” “Heroin,” and “Ghost” vaulted to No. 1 at Rock Radio. Not to mention, the latter picked up a GOLD-certification from the RIAA and win as iHeartRadio Music Awards Rock Song of the Year. Along the way, they garnered further acclaim from Nylon, Alternative Press, Music Connection, and Substream Magazine and performed on The Late Late Show with James Corden as well as Last Call with Carson Daly. They’re the rare act who can ignite a crowd at Kaboo Del Mar or Sonic Temple in addition to sharing bills with the likes of Cage the Elephant, Ghost, Nothing More, Shinedown, Soundgarden, and many more. Thus far, they’ve also gathered over 100 million streams and counting. Meanwhile, one-off singles “30” and “F*ck The World” reached Top 5 and Top 10 at Rock Radio, respectively. Before the Global Pandemic swallowed 2020 whole, Josh and Co. had begun penning ideas for what would eventually become This Is How The World Ends. As shit got real in Los Angeles, the band and their “extended family” of crew and friends picked up and moved to Nashville. “We’d wanted to rescue animals and live on a farm forever,” admits Josh. “Once we got settled, I built a little studio in a barn where I sleep and we finished the record.” The best kind of obsession catalyzed the process. When it came to production, the band took the reins, preserving an intense unpredictability. At the same time, Josh would watch and rewatch fan-captured live performances on YouTube in order to draw inspiration for recording.

Official WebsiteTwitterYouTubeFacebookMore Info
*Service and handling fees are added to the price of each ticket.