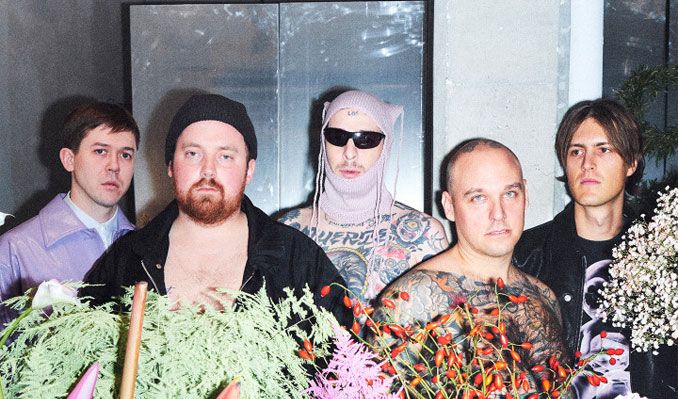 The VIAGRA BOYS event originally scheduled at Gothic Theatre on February 27, 2023 has been moved to Ogden Theatre.

Tickets for the Gothic Theatre will be valid.

V**gra Boys is a Swedish punk band from Stockholm. Formed in 2015, the 6 man band started exploring their very own lane in what would become to be called ugly gonzo post punk genre. With a wide range of influences such as Screaming Jay Hawkins, Butthole Surfers, Suicide, Dead Kennedys they’ve created a melting pot that we know as V**gra Boys.
The name V**gra Boys may make you think of failing sexual abilities, and that’s kind of what it’s about. The name was chosen as a pun to mans’ failed role in society.
It all started out when Henrik “Benke” Höckert and Sebastian “Sebbe” Murphy, who knew each other from the world of tattooing, had a rowdy night out. They ended up in a karaoke bar where Benke for the first time heard Sebbe singing, and he instantly knew that he had witnessed something special. He woke up the next day knowing that this was the start of something real. Anyone who has seen Sebbe perform will know exactly why.
They started writing songs together and after contacting guitarist Benjamin “Benis” Vallé, with whom Benke had been playing with for over a decade, and finally Sol Tor Sjödén on drums, the Viagra Boys were a fact.
After a couple of sessions at their rehearsal spot, making songs in their living rooms, countless recordings on their phones, their first recording project, the 12” “Consistency of energy” began to take shape. It was recorded in Studio Cobra in Stockholm.
From the very first gig it was a buzz, almost like a fever. Quickly the band got a reputation of being a one of a kind, real, unapologetically raw live act, and their unique sound spread contagiously through the underground scenes of both punk, hip hop, experimental electronic music and even jazz circuits.
Sebastians lyrics, wild energy and stage persona was compared to greatness like Iggy Pop, Gibby Haynes and Nick Cave.
“Consistency of energy” was reviewed on all of Swedens largest TV networks and newspapers, and it didn’t take long until the band was playing abroad.
After the release of their 2nd 12” ”Call of the wild”, the band was nominated for a Swedish Grammy. They played, amongst others, Leeds Festival, Reading Festival, Roskilde Festival, Öya festival.
2017 the band started working on their first studio album ”Street Worms”. The first recording session took place at Studio Rymden with Daniel ”Fagge” Fagerström as a producer and the second session took place at Ingrid Studios with Pelle Gunnerfeldt as a producer. The record was released in September 2018 on the label YEAR0001.
“Street worms” has put V**gra Boys on the map after critics around the world praised the grand introduction of what they called Swedens best kept secret. Pitchfork named the lead single “Sports” the “Best new track”, while Annie Mac played it regularly on her BBC Radio show.
With an extremely successful release the band played a quickly sold out London tour, including Rough Trade and the already legendary night at Shackwell Arms.
Read More

Official WebsiteFacebookMore InfoTwitterYouTube
*Service and handling fees are added to the price of each ticket.