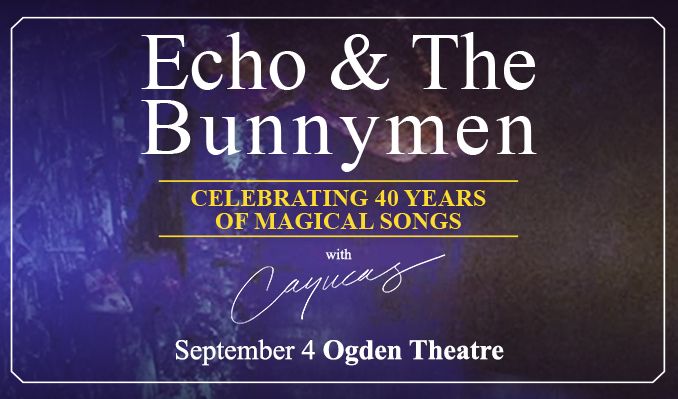 “’80s new-wave legends Echo And The Bunnymen are still making grand, sweeping, dramatic anthems, and they’ve got an album full of them called Meteorites” Stereogum

April 22, 2014 Santa Monica, CA:  Legendary Liverpool band Echo & the Bunnymen are announcing their return to the U.S. for a tour in support of their 12th studio album and first since 2009, Meteorites.  The first leg of the tour begins August 1st in Los Angeles at the historic Orpheum Theatre.  Confirmed dates listed below.  Tickets go on sale on Friday, April 25th.  Produced by Youth (Killing Joke, The Verve), Meteorites contains ten hand-picked new songs written by founder Ian McCulloch and performed by Bunnymen stalwarts Mc Culloch and Will Sergeant along with Gordy Goudie (guitar) and Stephen Brannan (bass).  The Bunnymen are releasing two singles—“Holy Moses” in the U.S. and “Lovers on the Run” in the UK.  Described by Ian McCulloch as the worthy successor to Crocodiles, Heaven Up Here, Porcupine and Ocean Rain, Meteorites will be release in the UK on May 26th and the U.S. on June 3rd.

Formed in 1978, the Bunnymen have been a vital force in the indie rock world for over 36 years having won over millions of obsessive music fans worldwide and indelibly influenced countless bands with their signature sound—from the Flaming Lips to Coldplay to Pavement. Meteorites is a key addition to their repertoire. It’s an intimate song cycle written by Ian McCulloch performed by the band with a renewed sense of purpose showcasing all of their unmistakable musical hallmarks while taking them to a new level.

Says McCulloch: “For me, this is a whole new approach. It’s more edgy than anything I’ve ever done.  I’m dealing with something on this record I didn’t want to deal with for a long time.”

FacebookTwitterMySpaceOfficial Website
*Service and handling fees are added to the price of each ticket.