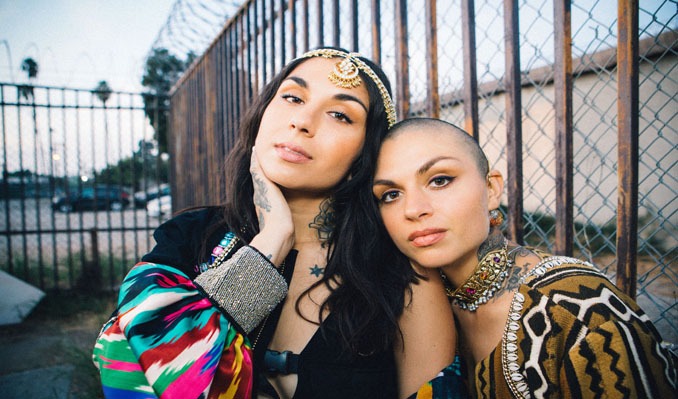 There is nothing you need to do as your tickets will be valid for the new date as well.
Read More

Fueled by an independent spirit and a revolutionary approach to art, Krewella is a pioneering dance music duo formed in 2007 in Chicago by sisters Jahan and Yasmine Yousaf. One of the most successful electronic acts of the past decade, Krewella first made impact with their self-released debut EP Play Hard (2012), which topped the iTunes US Dance Chart, and their breakout debut album Get Wet (Columbia, 2013), which features the platinum hit single “Alive,” the latter of which peaked at #32 on the Billboard Hot 100 chart.

With the launch of their own Mixed Kids Records imprint, named after their multiracial background, in June 2017, Krewella initiated their next creative phase. The result is Krewella’s new sound: a refined take on dance music that encompasses diverse styles, cross-pollinates genres, and takes cues from their multi-cultural upbringing. Remaining loyal to their electronic-based foundation, Krewella’s reimagined sonic style pulls cues from a wide array of diverse sounds—trap, Bollywood-flavored pop, R&B-tinged electronic—while exploring deeper themes of mixed ethnic identity, liberated sexuality, and creative experimentation.

Krewella now enters their next creative era with the highly anticipated zer0, their new artist album and their first major project in three years. Out January 2020 on Mixed Kids Records, zer0 is the culmination of the duo's more than decade-long artistic journey at the forefront of the global electronic music community. Hailed as a "transformative body of work that represents a new chapter in Krewella's career" (Billboard) and recognized as the group's "creative apex" (DJ Mag), zer0 sees the Yousaf sisters further exploring their intricate songwriting and production styles, expanding their independent spirit and international sound, and deepening their worldly approach to art.

Cohesively, zer0 is an "ode to the blank slate," Jahan and Yasmine say of the album. "Zero is a place where the pendulum has swung all the way in one direction, then so far in the other, and then finally, as if with an exhale of relief, balances slowly in the center. Zero is a feeling of emptiness, but not of lack—it’s being a blank slate, newly reset—seeing everything with new eyes, a full heart and open mind. Staying in this state forever is impossible, but dipping your toe into it is a blissful moment; experiencing it for even an instant is a reason to keep striving. It is stillness and free-falling, nothing and everything."

To create the zer0 universe, Krewella enlisted a roster of global collaborators, including Indian electronic producer Nucleya ("Good On You"), Pakistani singer-songwriter and entertainer Asim Azhar ("Paradise") and several others.

On zer0, Krewella tackle real-life social issues and current cultural affairs, from mental health to human connection, while offering empowering messages and optimistic perspectives. Lead single "Mana" is a frenetic "feminist anthem" (Billboard) about power, spirituality and the duality of feminine and masculine that perfectly encapsulates Krewella’s creative experimentation and globally inspired sound. Elsewhere, "Ghost," "some of Krewella's most sophisticated and pop-leaning work to date" (Billboard), contends with complex emotions and life experiences and explores the fine line between loneliness and empowered independence, all under the veil of a dance floor bop. Album closer "Greenlights," which was used in anational ad campaign for gym franchise Orangetheory Fitness, is a future-forward bass anthem that doubles as an "uplifting rallying cry that transforms self-doubt into impenetrable self-confidence" (DJ Mag).

In their evolved artistic direction throughout zer0, Krewella dive deeper into expressing themselves and their relationships, and begin to probe the darker shadows of their psyches.

Recognized as part of Forbes’ annual coveted 30 Under 30 list in 2016 for their top-billing status in the international festival circuit, Krewella have performed at major global music festivals including Coachella, Lollapalooza, EDC Las Vegas, Ultra Music Festival, iHeartRadio Music Festival, Storm (China), and many others, in addition to their own headlining tours and Las Vegas residencies. As one of the main elements of the Krewella canon, the group’s onstage performances serve as the live extension of their music and art. Incorporating a multitude of audiovisual elements together with Jahan and Yasmine’s live vocals and powerful onstage energy, their versatile shows have expanded alongside their ever-evolving sound and visual aesthetic to encompass full-on live band performances, DJ sets and DJ-live hybrids throughout the years.

YouTubeOfficial WebsiteMore InfoFacebookTwitter
*Service and handling fees are added to the price of each ticket.