with Defunk, Moontricks and Ryan Mahrer 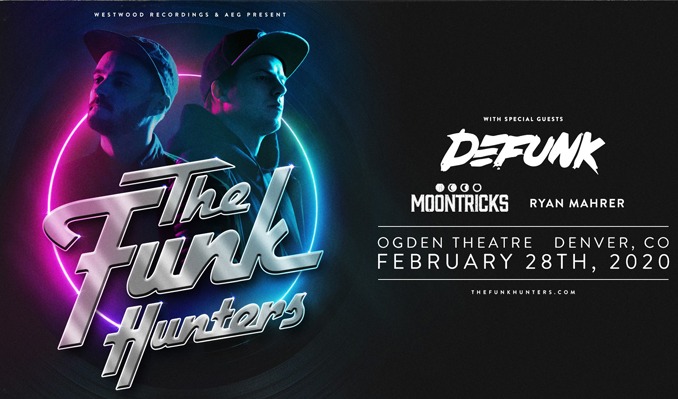 In a sea of carbon-copy producers, The Funk Hunters have cultivated their signature sound by creating forward-thinking electronic music that is influenced by old school funk, soul and hip-hop.

As longtime friends, collaborators, and multi-dimensional artists, Nick Middleton and Duncan Smith’s chemistry is perfectly aligned. Middleton steers the band’s studio efforts, having produced, co-written, and mixed their debut album, TYPECAST. And Smith anchors the project’s live show with an indefatigable charisma that compliments Middleton’s thoughtful production. Together they combine their powers as DJs, resulting in a brilliant technical display of creative collaboration between 4 turntables.

Their vision has resonated with both listeners and industry tastemakers alike, with their music amassing over 10 million track streams across their catalog of original productions, remixes and collaborations. Winners of the Electronic/Dance Artist o fthe Year at the Western Canadian Music Awards, The Funk Hunters also reached #1on the Billboard Dance Club Chart last year, with an official remix of U2's "Love Is Bigger." Their catalog also includes other official remixes for Big Gigantic, Gramatik, Selena Gomez, and Imagine Dragons

In addition to studio work, The Funk Hunters enjoy a vibrant global touring career with major festival plays at Coachella, Life Is Beautiful, Lightning in a Bottle, Electric Forest, Osheaga, Outside Lands, Burning Man, and Shambhala. They consistently play to the biggest dance floors in the world-frequent collaborator Chali 2na of Jurassic 5 fame has called them "the selectah's of the century."
Read More

TwitterFacebookOfficial WebsiteMore Info
*Service and handling fees are added to the price of each ticket.